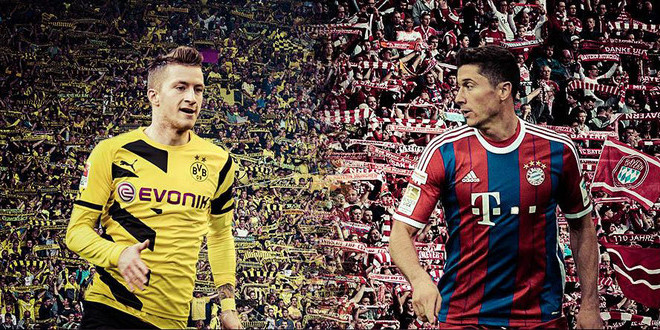 Despite a 31 point gap in the Bundesliga, German fans and fans of German football around the globe still get up for the game, dubbed ‘Der Klassiker’ in recent years, between rivals Bayern Munich and Borussia Dortmund.

After an incredibly poor season Dortmund are now enjoying a 7-game unbeaten run and sit 8 points clear of the enthralling relegation battle in Germany’s top division.

As home to the BVB NYC Supporters Club, Legends Bar in Manhattan will play host to many black and yellow jerseys, although expect a sizable turnout from FC Bayern fans too. The main floor will be dedicated to the clash with audio playing throughout.

New location, and newcomers to ‘Der Klassier’, Bar 43 in Queens will welcome fans from both sides in their first official screening of Germany’s top clash as a Football Factory location. Bar 43 will be utilizing it’s dual audio system with audio for Chelsea v Stoke City playing on one side of the bar and ‘Der Klassiker’ on the other.

Join us Saturday, April 4 for what should be a great game! Kickoff if 12:30pm but arrive early as large crowds are expected.